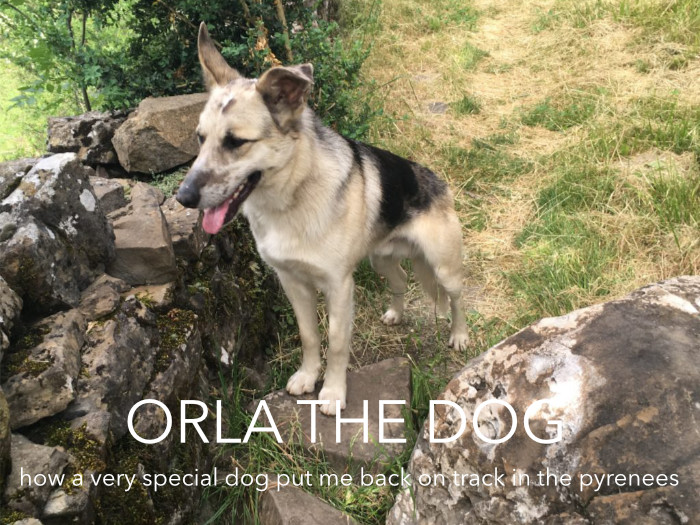 I had only been going for an hour and already I was tired. The previous day, day 8 of my adventure , had been tricky – the weather had closed in and I had got lost on top of the mountain. I finally found my way to the bottom after night was falling, covered in scratches, cold and wet and I had had the evening to reflect on just how dangerous this undertaking was.

But today was another day and I got to the village of Broto without incident and headed along the river looking for the GR11 sign that would take me ever further East. I arrived at a large map in a small square by the river, got my bearings and set off on the long climb to the next summit. I had noticed an Alsatian in the square – I had learnt to have a healthy respect for all dogs on this trip but particularly Alsatians and runners represented a nice moving target to aim for. Although I was tired my legs felt strong and I was moving at a good clip along the gently rising path before the climb proper where I knew my pace would slow to a crawl.

I had been climbing for about half an hour up the narrow path with a spectacular drop to my left when I sensed that I was not alone; I often had these feeling on the mountains even though I sometimes didn’t see a soul all day, but this time was different, more powerful. I looked behind me – nothing. I kept going but the feeling of not being alone wouldn’t leave me. I turned round again and looked down the narrow path to see the Alsatian from the village less than 50 metres behind me. What an earth was he doing here? I was sure that he had been with a couple when I was in the square. Every time I turned round he stopped but each time, like a game of cat and mouse  he was ever closer until eventually he was right behind me. I stopped and tried to shoo him down the mountain but he wouldn’t budge and stuck a couple of paces behind me each time stopping as I stopped. What should I do? Should I take him back to his owners? But I was already more than a hour from the village. Would he go back on his own accord. As I pondered this a couple of hikers came down the mountain towards me. This was unusual in itself but it would be a godsend; they could take the dog down to Broto to be reunited with its owners and I could -press on on what was going to be along hard day.

After exchanging pleasantries I told them my story about the dog. “Oh don’t worry” said the man, “There are tales of dogs in these mountains following travellers for days – he will return home when he feels like it”. Great! My mind raced – what was I going to do with him tonight when and if I found somewhere to stay, would we end up huddled in a shelter somewhere. As I bought myself to the present moment I realised that the couple had departed and the dog was sitting at my feet.

I rummaged in my rucksack and took out a battered flapjack which we shared and then I poured some of my precious water into the cup of my hand which he licked happily. “Well if we are going to be travelling companions you’re going to need a name … how about Orla, I like that”. And so it was that Orla and his new friend started climbing again.

After another 45 minutes we ran through a deserted hill top hamlet before coming to a point where two paths crossed. I sat down and we shared the last of the flapjack and had another sip of water. I knew we had to press on but Orla had other ideas. He was lying across the narrow path and wouldn’t let me go forward – if I sat down he sat down, if I got up to go he lay across my feet and wouldn’t budge. It was like he was trying to tell me something but what? I was sitting on a little hummock back, resting against a post on the path crossroads. I turned at noticed there was a battered sign at the top of the post with a name carved in wood. I’m sure the name rang a bell … and then it dawned on me the name of the village was to the West – I was going 180 degrees the wrong way.

I turned tail and as one Orla  got up and was again padding in my footsteps a respectful yard or two behind me although it was he should be leading as he had a far better sense of direction than me. As I descended I tried to make sense of what had just taken place – had the dog really followed me to put me back on track figuratively and metaphorically, after all I knew from previous experience and in particular the 8 marathon 8 day 8 Country challenge that the early stages was the danger period for wanting to quit. I’ll never know but I like to think that he was sent to me that day and as the trip got to the latter stages I often thought back to Orla, that very special dog.

You probably want to know what became of Orla? Well we got down close to the square and there was his owner sitting patiently on a wall waiting for him. I was glad to re-unite them and I swear as I left them Orla turned and gave me one last glance as if to say ” go on you can do it”.

2 thoughts on “Orla the dog”