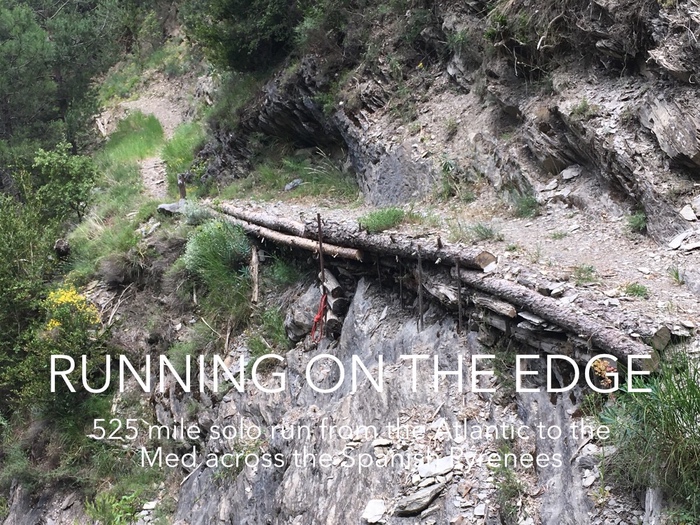 It was still dark outside as I put on my running gear for the umpteenth time. It was only day eleven of my journey across the Pyrenees but I felt as if I had been running for ever. Although it was early I was glad to be leaving the hotel – it was one of the very few places that I had encountered where the staff had not been friendly and besides I had a lot of climbing to do today as I was leaving the valley and heading back up the mountain.

No breakfast but I was getting used to that and as I traversed up the side of the river, the early morning mist lifted and the sun came out which made me feel a whole lot better. I decided that I even had time to bask on a rock for 15 minutes and let the sun warm my tired bones. I searched the pockets of the rucksack in the vain hope that there was a scrap of food there – perhaps a bit of congealed chocolate or a half eaten flapjack. No the cupboard was bare, breakfast would have to wait.

Muffins and new friends
For once all the path markings seemed to be clear and it was with a spring in my step that I reached Lafortunada which appeared to be completely deserted. By this time I would have eaten absolutely anything so it was with some relief that I found a builder working on a house who pointed me in the direction of the one and only café. I rustled up two cups of strong coffee which came with a miniature muffin and seeing the gaunt look on my face the owner gave me an extra couple for luck It was so comfortable here but I remembered the ultra runners mantra “beware of the chair” and reluctantly heaved my rucksack onto my back and waved goodbye to the owner. I saw the nice builder on the way back to the path and with some hesitation offered him one of my precious muffins … unfortunately he gratefully accepted it. Never mind, perhaps my generosity would be rewarded later in the day.

The sun was beating down now, but suitably refreshed and with full water bottles and a stomach that had stopped grumbling I pressed on. Up and up I climbed with the path getting ever more precarious; in some places it was perhaps no more than a metre wide and so exposed that it was hacked into the side of the mountain and the edge reinforced with tree trunks. One false step here and that would be it. It was strange but I can honestly say, with one or two exceptions, that I very rarely thought of the danger which was probably just as well.

So what did I think about when I was on these stages? For the most part, particularly at the start of the day, my mind was a mass of calculations. I knew that the last thing I could afford was to be stranded on the mountain after nightfall so all the variables were fed in – how fast was I going, what was the climb like, where was a likely stopping point, how much water was I using, where would the next water point or stream be etc. By early afternoon my thought pattern would have changed depending on where I was. So from “oh fuck it I’m not going to make it, I’ll have to sleep under a boulder”, to “god I’m hungry” or more often than not “this is the most beautiful place I’ve ever been”

Finally I reached the top and started the steep descent into Sarvillo where I was sure I would find something to eat and a chance to get my bearings. Well I was right on one count – No food but there was a sign which reliably informed me that the route to Plan and my proposed night stop would take 8 hours walking. So even if I could knock an hour or two off that on the bits I could run I calculated I would be there about 10:30pm – not good news. So once again it was decision time. There was a road that I calculated would get me there before nightfall if I could go at a reasonable pace.

The decision was made and it was with a jaunty step that I ran past the sign on the side of the road that read “NO CAMINE POR LA PISTA”. The road was fairly wide with a little verge that I could hop onto on the rare occasions that a car or lorry approached me. As the road climbed up the side of the mountain, the drop to my left got steeper and steeper and there was now a solid rock wall on the right side of the road too. But I wasn’t unduly concerned as I was facing the on-coming traffic and the traffic was light. That all changed when, to my horror, I saw a sign announcing that a tunnel was ahead. I stopped at the entrance and considered my options – on my left was deep ravine and to my right a shear rock face so it was either turn back and try and find a barn or shed to sleep in or go through the tunnel. No choice really. I tilted my head to hear if there was any traffic approaching and then took off up the road at a rate of knots and into the dark tunnel. It was an eerie feeling but the tunnel was short and in no time I emerged into the bright sunlight and the relative safety of the open road. What was I worrying about? I was not lost for once, I was going to make my destination before it got dark and I was definitely going to get something to eat.

I passed through another short tunnel without incident before coming to a bend in the road and yet another tunnel. What made this one different was that I couldn’t see the light at the other end so it was likely to be much longer than the others. I was near the top of the mountain now so the drop to my left was probably more than 1,000 feet and of course there was the shear wall of the mountain on the other side. I noticed too that the traffic was getting heavier with one or two lorries – perhaps it was approaching the end of the working day. 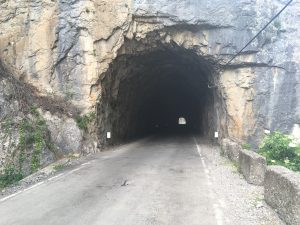 There was no turning back now so I gathered myself for one final sprint. I was wearing black shorts a dark t-shirt and my pack was black so I put on my jacket which had some faded fluorescent patches which might be picked up by oncoming lights. A final deep breath and I was off – I ran as fast as my tired legs could carry me into the darkness of the tunnel. But then my worst fears were realised – I heard behind me the deep exhaust of what sounded like a large truck as I saw the faint glow of lights off the walls of the tunnel as a car approached. If they didn’t see me this would be it, there was no way that there would be room for a lorry a car and a human too and besides what idiot would be running through a tunnel dressed in black with no light.

I would like to say that my life flashed before me, that I thought of all the things that I hadn’t done or said, all the people I was going to leave behind but in fact my only thought was “bugger – not even half way”. I ripped my pack off and pressed myself as flat as I could into the cold walls of the tunnel just as the lorry and the car passed. I swear I felt the caress of the wing mirror as the lorry and car crossed paths and disappeared into the distance. I grabbed my pack and ran like hell for the light at the end of the tunnel and it was at least two minutes before I emerged, ran to the side of the road and threw up. I sat on the Armco and composed myself before continuing without further incident to Plan where a hot bath, a hot meal and a warm bed awaited me.

So that was another life used up and still 200 miles to go – what could possibly happen next.