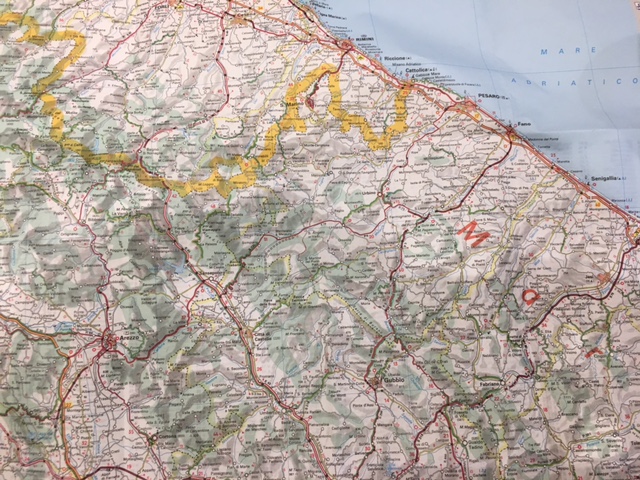 Well I’m nearly ready for this one Transitalia 2017….. in that I’ve got a flight to Bologna and a hotel booked at the starting point, Cattolica. Other than that preparations are taking their normal shambolic shape. For those of you who don’t know about my latest adventure, I’m following up my romp across Spain via the Pyrenees by running across Italy. This is part of the TRANS COUNTRY CHALLENGE where I am trying to run across as many countries as possible.

I decided to change the route last night which will take me on a more direct path right across the Alpe di San Benedatto before dropping down south of Florence and heading to Marina de Cecina and the finish. So  more mountains but I’m counting on the weather getting warmer over the next few days otherwise I will have to revert to Plan ‘B’ (and as we know there is no Plan ‘B’). The route looks more interesting and I think the landscape will be spectacular giving plenty of opportunities for pictures and videos. Mind your on the Pyrenees adventure I was so tired I didn’t get a chance to shoot much video so we will see.

The lead up in terms of exposure has been a bit more productive – I’m really excited to be a guest on the Bill Buckley Show Radio Berkshire later today and I am featured in the Reading Chronicle and Get Reading. Hopefully this will lead to some much deserved publicity for SARVA ( sarva.org.uk ) , a wonderful charity that I try to mention when I can.

Anyway the show gets on the road this Monday when I fly to Bologna and then on to Cattolica on the Adriatic coast. The Transitalia run proper starts on Tuesday and I hope to arrive in Marina di Cecina on the Tyrennean coast one week and 200 miles later.

Update 2020: Well I somehow managed to complete this one! You can get a flavour of the adventure here