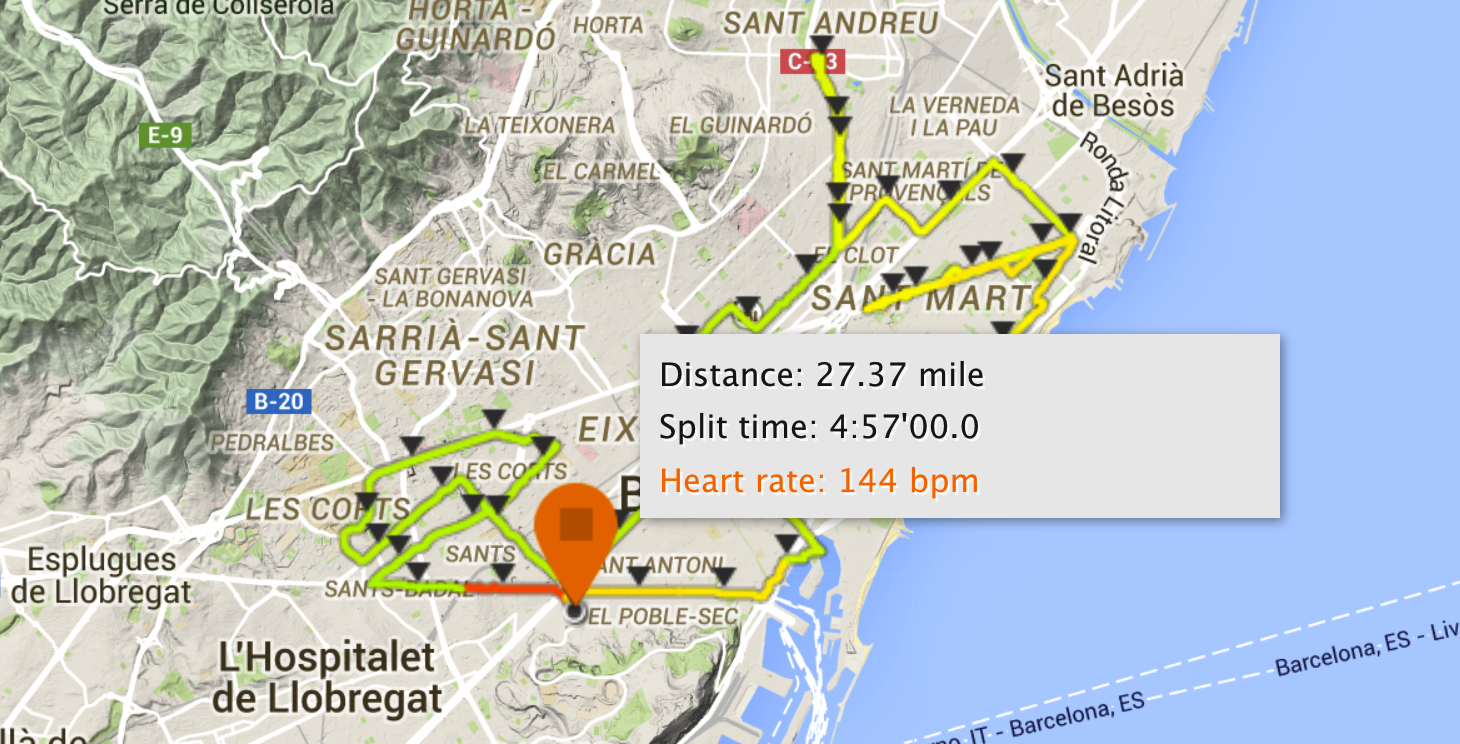 I’m often asked how my marathon journey started – well here’s the story, warts and all …

“Do you want any help with your bag Andrew”, one of my workmates asked as I stood, bent over the railings, halfway up the metal staircase. “I’ll be fine thanks” I replied as I continued my slow, painful progress up the stairs, each step sending a searing pain through  my ankle and knee joints.

Finally I reached my office, threw my bag down, slammed the door shut in frustration and slumped heavily in my seat. How had it come to this – a school sports star and action junky who spent pretty much every wakening moment outdoors as a child, reduced to a fat, bloated, arthritic and bitter man. A tear rolled down my cheek and splashed on the veneered desk; I put my head in my hands and wept.

18 months later, as I stood nervously on the start line of my first marathon, the 2013 Marato  di Barcelona I reflected on the journey I had taken to get here and to be, at least in with a shot of realising my ambition – to complete a marathon in under 5 hours. I though about the people who told me I would never do it and would cripple myself or worse – probably one doubter for each of the 26 miles I was about to run.  I thought about Gabriel, the fantastic gym instructor who never gave up on me and helped me loose more than a quarter of my body weight and didn’t laugh when I had to hold onto the side of the treadmill when walking (let alone running) in case I fell off! I thought about the fantastic physio Johnathan, who, when I displaced a disc in my back 3 months earlier, assured me he would get me at least to the start line if not the finish. Finally I thought about my mother and how lucky I was to inherit a fraction of her bloody mindedness and determination if none of her brains.

Now I was alone and it was down to me. I had had sleepless nights for days, not just because I could only sleep sitting up to protect my back but also worrying whether I would let myself and my supporters down. My longest training run had been 18 miles a few weeks ago and some weeks I had hardly been able to run at all. I looked around me – everyone looked so fit and confident in what they were about to do even though I had placed myself right at the back of the 10,000 or so starters. Laughing and joking with their friends, stretching this way and that and jumping up and down on the spot or doing short little sprints. Not for me – I was terrified of injuring  myself before I even started and besides who was I to talk to, at my insistence my family were safely back at the hotel and would cheer me on further down the course.

So I looked at the positives! I had met a really nice Spaniard runner on the metro and, sensing that this was my first marathon (did it show that much), he introduced himself and advised me to make sure that I ate a little and drank at every opportunity. Great advice but sadly I had thrown up my breakfast in the bushes by the start line! Never mind I knew that I was fantastic at mental arithmetic and had memorised all the pace notes that I had made so I would be able to fret the whole way round about being behind my 5 hour target instead of just at the end!

At last the moment had arrived, the countdown began, the hooter sounded over the deafening roar of the thousands of people who had come to cheer us on and we shuffled forward towards the arch that marked the start. I just had time to press the button on my watch before I was carried forward with the surge of bodies over the  line and the beginning of my adventure.

I knew I had to run around the 11:00 minute a mile pace to complete the course in under 5 hours. This built in one pee stop ( I probably wouldn’t need that as I would be so dehydrated), and allowed me to walk through the food stations drinking and eating as I went. Other than these interludes at the feed stations I would run the whole way. After all, it was only 8 miles more than I had ever run before, what could possibly go wrong.  I got my answer after less than two miles – quite suddenly I had an uncontrollable urge to have a pee; how was this possible I had been going every 15 minutes since about 2 hours before the start. No time to reason why, but just to dart behind some bins and then surreptitiously re-join the runners (there were no portaloos as presumably the organisers though it would be unlikely that anyone would want to pee so close to the start) and I don’t think any of the thousands in the crowd noticed either.

I settled into some kind of a rhythm and let my mind relax and take in the sights and the crowds thronging the streets .. Except that I couldn’t relax, my mind was whirring – why were these shoes so tight and why did my toes hurt, why was everyone passing me, why, when there were 10,000 competitors, did I manage to sandwich myself between a Brit with the loudest voice in Barcelona (busy telling his friends how easy it was but he would wait for them) and a man who insisted gobbing every few metres onto the road just in front of me and blowing his nose on his fingers!

The aid stations came and went and my back, as it often did, started to ease as the miles piled up. I had even got used to Mr Snotapotamus’s bodily functions and was getting quite adept at dodging his missiles! The ‘voice’ was still there although the volume had definitely dropped down a few decibels and would be silenced before the end of this adventure. The toes were becoming more irksome but I resolved not to worry about that until the end – pitter patter, pitter patter get into a rhythm and keep going!

I knew that to complete my mission I wanted to pass the halfway point in under 2:25 – 2:22 my watch showed, wow even ahead of schedule, this was going to be a breeze. It was around the  19 mile mark that the wheels started to fall off. There was definitely something happening inside my shoes that wasn’t good (I subsequently lost 3 toe nails) and my legs were starting to stiffen up catastrophically and were feeling like lead. “One foot in front of the other, one foot in front of the other, don’t walk, don’t walk” I kept repeating to myself. I knew I was struggling when at the 35km mark a leady in a tutu and a magic wand walked passed me. My mind was frantically re-calibrating distances and time – this was going to be a real cliff hanger but 41km I was going to just make it. “41km” I screamed to myself – “you idiot it’s double a half marathon so just over 42km!”

The crowds were going wild, maybe not for me but who cares, I gritted my teeth and thought it’s now or never, cometh the hour cometh the man and all the other bollocks I could think of. I put my foot on the gas and ….. Nothing happened, my legs felt like the were running through treacle. I let out a string of expletives much to the alarm of the 60 year old passing me on my right! The final km was a blank and my time …. 4:57 – well you didn’t think I was going to balls it up – did you?!

As I crossed the line, I knelt on the ground, put my head in my hands and wept, but these were tears of a very different nature – one marathon journey had ended and another was just beginning.