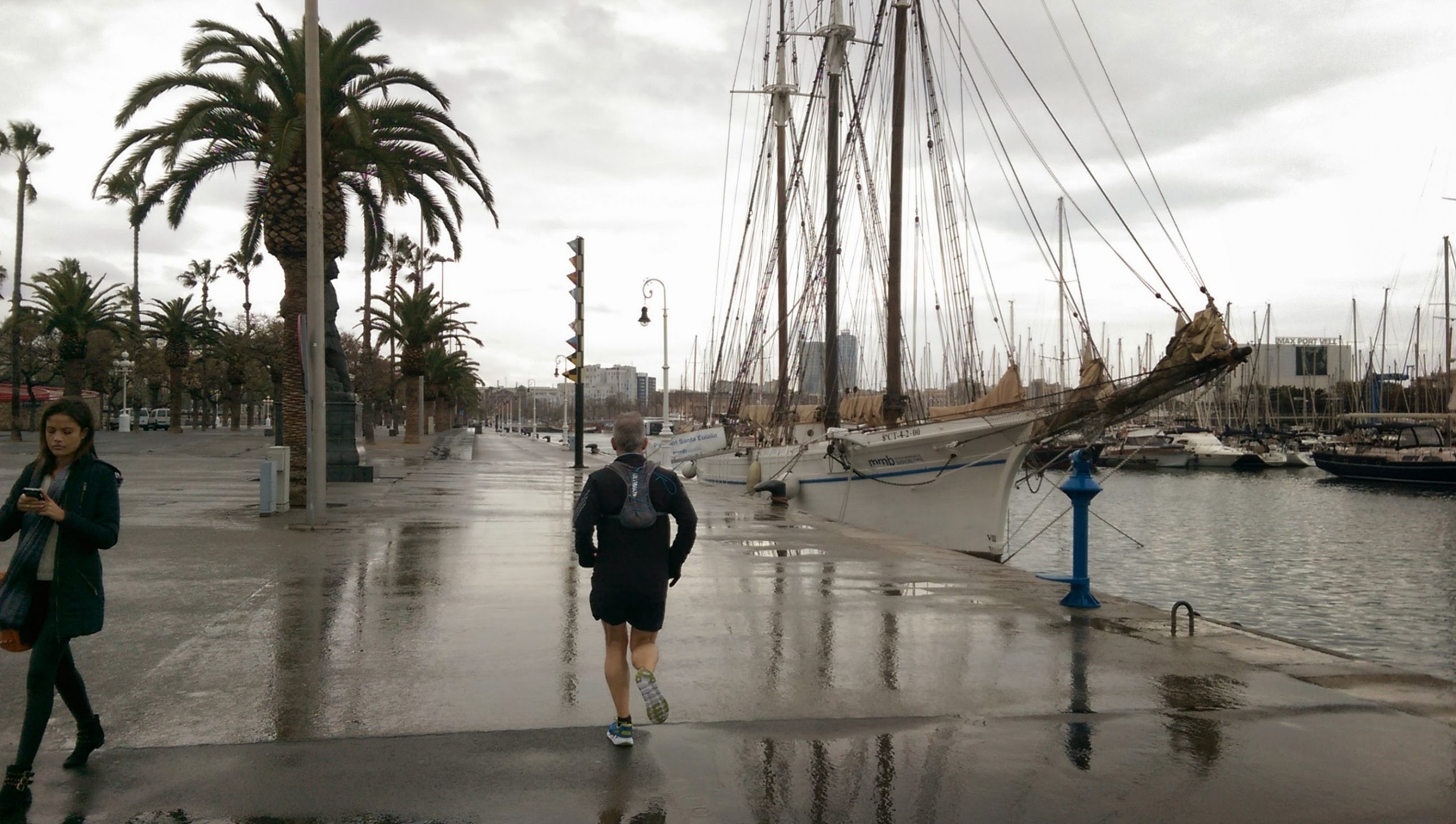 There was an air of anticipation as the plane came in low over the Mediterranean and touched down at Barcelona Airport. Deja vu for me as I, along with 10,000 other competitors, had run my very first marathon here in 2013 – in fact this was the run that had started my endurance running adventure.

The following morning, bright and early after a hearty breakfast, Marlena and me assembled outside the hotel, did a few stretches, synchronised watches and we were off! I had managed to leave the 2013 course map at home so we decided to use the hotel tourist map and make it up as we went along; it would be more fun, it had worked on our other runs and what could possibly go wrong!

As for our Brussels and Lisbon marathons it was raining just for a change but we were used to this now and it certainly wasn’t going to hold us up. After a mile or so we reached our first landmark, the stunning Sagrada Familia cathedral. Time to shoot a bit of video and take a few pictures before we headed off towards the main tourist area, Las Ramblas, a long, broad avenue that led towards the marina and port area. Despite the early hour, there were already a lot of people about and with the constant stop/start to cross the little side streets we knew that this was going to be a challenging run. We decided to head off towards the port area where there would be no traffic to contend with and we could put in a few fast miles.

The rain was coming down in stair rods now so it was time for a quick pit stop – a cup of Starbucks herbal tea with the obligatory honey of course. Suitably refreshed we sped along the broad path that skirted the shore line before arriving at the port gates but – no entry to runners. We could see a large park that we were trying to get to but it did mean crossing a busy motorway and after the debacle in Lisbon where I had navigated us onto the motorway I knew better than to suggest to Marlena a quick sprint across the 4 lanes to reach the park. So we doubled back until we found a bridge that would take us to the other side – a much safer bet!

The diversion was certainly worth it as within a mile or so (and after another pit stop) we found ourselves in the magical botanical gardens with paved paths lined with huge cacti of all varieties – definitely a photo opportunity! I was quietly confident in my map reading abilities by now so up and up we climbed and down and down we went before ending up, 4 miles later, a few feet from the cactus garden again – uh oh!

With Marlena once again firmly in charge of map reading duties and normal service resumed it wasn’t long before we climbed out of the park and along a magnificent vista, the Avenue Miramar, with spectacular views across the whole of Barcelona. More photo opportunities and not just for us – a couple were pleasantly surprised when they asked Marlena to take a picture of them both and found out that she was a professional photographer – a bit of a bonus! Photo session done for us and half the tourists in Barcelona it was time to head down the hill to our next destination, the marina and beach.

I remembered the marina and the enormous yachts from my visit in 2013 – no recession in Barcelona if these were anything to go by! As we passed through the marina we headed onto the sandy beach – the going here was tough as not only was it tipping it down but the sand was heavy and there was a strong headwind too. So with 17 miles already done we were happy to head towards our next major landmark, the Agbar Tower or as we christened in Spain’s gherkin! We had seen this from a distance for the last 17 miles and so we were really pleased to finally come face to face with our nemesis and to find out too that it wasn’t derelict (as it looks from a distance) but actually a thriving office building.

From the Agbar Tower we headed up a steep climb again (don’t let anyone tell you that Barcelona is flat) and towards our final destination Park Guell (or Goudy’s Park). As usual the sun shone on us, metaphorically speaking as it was still pouring down, as we looked longily at the ice cream in the shop at the top of the climb. “How much for 2 ice creams” – “6 euros” was the answer and we emptied our pockets and mustered all the coins we could find and came up with exactly ….. 6 euros! Let me tell you we were hot and wet and those were the best ice creams ever.

A quick spin round the gardens, some more photos and then it was time for the long descent down to the finish. We flew down, all the tiredness in our legs gone (it must have been that ice cream) and we reached the hotel just as the watches ticked over to 26.2 miles. Happy, hot, wet, tired but the job was done and now time to celebrate – Viva Barcelona!