Ultra Running and the “Starvation Zone”

Regular readers of this blog will know that I’ve had two DNF in the last two races that I’ve entered, The Thames Path 100 miler and the Sierra Nevada Ultra, Now there were mitigating circumstances but aren’t there always. The bottom line is that I retired in both of them.

So I’ve had a long hard look at what has changed over the year and what I can do to get back on track.

I refuse to accept that age has anything to do with my predicament – but then being 61 I would wouldn’t I. Sure over the years there will be a slowing down but Marco Olmo won the UTMB at the age of 59 , Rich Roll competes in World Championship triathlons and “Marvellous Mimi” is running across the USA as I write this. If anything as the years have added up I’ve got better at the longer distances where the mind plays just as important a part as the physiology and where raw speed doesn’t count for as much. 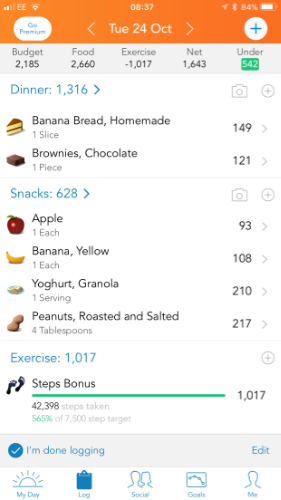 When I started this road to recovery more than 5 years ago, I did maintain a vegan diet for more than 12 months (& felt fantastic) I’ve made a few changes since and have introduced fish into my diet and I definitely eat more bread than I used to. I also have an addiction for peanuts – uh oh I’m getting hungry just thinking about them. In fact I’m almost always hungry and I’ve put on 6kg in the last year – So maybe the key to the problem was here somewhere?

I struggle to think how I managed to run across Spain and Italy without getting any significant injuries yet I’ve been injured several times this year from the most mundane activity. In fact I ran across Italy with a heavy cold but still managed to complete the challenge although I think that was more about “mind over matter” – if you know you absolutely have to keep going to survive (as was the case with some stages of the Pyrenees trip) then that tends to keep you honest. So I definitely needed to change my mind set and be more positive about the training runs and the “downtimes” from the epic adventures.

I looked at other potential influencing factors too – I’ve never needed much sleep so no change there, I was more flexible thanks to my wonderful yoga teacher, David Charles Manners, who had persevered with me for more than a year.(As an aside if you only read one book in your life make sure it is David’s “Limitless Sky”). I wasn’t more stressed than normal although writing the book, “Moving Mountains”was taking longer than I had hoped.

So where did all this self analysis and soul searching leave me? Well the more I thought about it I was convinced that my slump was primarily connected to my weight that had accumulated throughout the year and to my mind set of only being able to get myself up for the really epic challenges (as if running 100 miles or running in 48c heat wasn’t!).

My weight was an interesting one – when I had my epiphany (which you can read about here) I weighed 108kg and with a height of 180cm this made me clinically obese. Over the next two years I got down to between 76-80kg which is my ideal weight (I’m broad & not just in the beam!) Currently I am 85-86kg and whilst I am careful about what I eat and take a huge amount of exercise I can’t seem to make any impact on my weight and as I’ve already said I’m permanently hungry.

So perhaps this was the key to my lacklustre performances – I decided to investigate further. The hunger had really started since I had come back from the Pyrenees 12 months earlier. There I had been running between 20-30 miles consecutively for 27 days as well as taking in an elevation gain of between 3,500 – 6,000 ft each day. I estimated that I was probably using up to 3,500 calories + my resting cals. If you’ve read my story you will know that I was carrying all my own gear and was getting my water from mountain streams and water points and grabbing whatever food I could find en route. I often missed breakfast and lunch maybe just having some fruit that I had nicked from the night before, so my only “proper” meal of the day would be in the evening. I never quite knew where I was going to end up and being vegetarian there wasn’t always a huge choice so more often than not it was a cheese pizza or potato croquettes – not exactly food packed with nutrients.

I did some googling and came up with this brilliant article about running, eating and “Preservation/Starvation Mode”. This seemed to fit my situation exactly. After the exertions of the Pyrenees my body was going into preservation mode. I started to eat “normally” as soon as I came back and only took 3 or 4 days off before I started running again. As far as my body was concerned it wasn’t taking any risks! Before I left for the Pyrenees I was running up to 100 miles per week and could eat what I liked but I always had a healthy diet (other than those peanuts!). My body was slowing my metabolism and laying down any reserves as fat. I started to feel more and more lethargic but I put this down to post expedition blues and kept running as much as I could. I started to pick up the odd injury and pulled a hamstring which kept me out for weeks. As the weight started to pile on I ate less and less which of course put my body further into preservation mode. It didn’t help when earlier this year I decided to run across Italy and whilst this wasn’t quite on the scale of the pyrenees epic it was still 7 marathons in 7 days and taking in 20,000 ft of elevation.

I decided to use a fitness app to strictly monitor my calorie intake (I use “lose it” because I find “”My Fitness Pal” has started to have really intrusive ads. This allowed me to ensure that I was eating enough and at the same time took into account the amount of exercise I was taking so when I running more I would need to eat more and vice versa.

Next I looked at when I was eating. I tried, wherever possible, to make sure I ate before a run and more importantly within an hour of finishing – nutrient rich foods too.

And the results – well I’m definitely feeling less lethargic and I’ve lost 2kg in 3 weeks so I’m heading the right way. Next I’m going to look much more closely at what I’m eating and I may re-visit the vegan option once I’ve studied it a bit more. Come back soon for an update – you can sign up on the home page to make sure you never miss a post.

Disclaimer: I am NOT a nutrition expert and I’m not qualified to give advice (I can barely tie my shoelaces). I do run a long way and try and maintain a healthy diet. These are my personal observations and I hope they help!